This past weekend was Fall Encampment for our Scout Troop. Fall Encampment is an annual event where a number of units gather together to share in a service project, engage in some competition, and enjoy each one another’s talents around a campfire. The theme this year was, “Are you trustworthy?”

Our service project was cutting into a hillside leading down to the campfire bowl so that wooden benches which we salvaged from a bridge repair could be put in place to provide group seating. The boys and adults jumped right in and completed a project that the planners were not certain could be accomplished in the time allotted. But they did it, and did a great job. And I can tell you that being able to sit on a bench Saturday night next to my son (along with not having to carry my own seating) was a real pleasure. This was definitely a task that was made possible by a number of people working together. 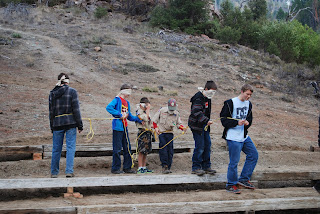 When it came time for the competition in the afternoon the boys were surprised to learn that every single event was going to have to be done blindfolded, well except for at some point when one member of each patrol would be allowed to take off his blindfold to guide the patrol through the final steps. The boys had to work together to accomplish normal scouting activities in the dark. They had to rely on each other communicating and being there to help. And they really had to rely on the guidance of the one who was allowed to see.

I paired up with our other unit leader to run the first aid event where they had (according to the story) been hiking back and got delayed when darkness set in. One of the boys stumbled and fell and may have broken his leg. They had to bandage and splint his leg, make a stretcher (only having a tarp for this), get him onto the stretcher and then navigate twenty yards at a compass bearing of zero degrees. When the injured Scout was placed on the stretcher one of the boys could then remove his blindfold in order to read the compass and guide them to the finish. They were required to show that they had matches with them so that, theoretically, they could light them in order to read the compass. Knowing what items they were supposed to have, most of the units were fairly well prepared, but some simply were not. Some of the units worked very well together communicating instructions, and, of course, some did not which was reflected in their completion times ranging from just under five minutes to, well I won’t say.

Yesterday at the end of our Scout campout, after breaking camp and before leaving for home, we had a brief devotional time from Ecclesiastes 4:8-13 and 5:1. In this passage there is a contrast between the loner and the one who learns and knows the value of being dependent on others.

In verse 8 we read, “There was a certain man without a dependent, having neither a son nor a brother, yet there was no end to all his labor. Indeed, his eyes were not satisfied with riches and he never asked, “And for whom am I laboring and depriving myself of pleasure?” This too is vanity and it is a grievous task.” (Ecclesiastes 4:8, NASB95)

I started with verse 8 because it illustrated the foolishness of a self-focused and lonely life. When we are the center of our lives there really is no object to it. There is no one to help, no one to provide for, no one to share in labors and even joys. It is indeed a difficult and purposeless life. We spoke briefly about how empty this man’s life must have been.

Then we looked at verses 9-12 which read, “Two are better than one because they have a good return for their labor. For if either of them falls, the one will lift up his companion. But woe to the one who falls when there is not another to lift him up. Furthermore, if two lie down together they keep warm, but how can one be warm alone? And if one can overpower him who is alone, two can resist him. A cord of three strands is not quickly torn apart.” (Ecclesiastes 4:9–12, NASB95)

Looking at these verses, we talked about the competitions of the day before and their need for each other. We talked about the Scout buddy system where no Scout is to go anywhere alone and the foolishness of some reports in the news recently on lone hikers. And we talked about why they were arranged in larger patrols where they could share in their greater abilities to accomplish even more. In considering these we even looked at the simple construction of the common rope used for so many of their Scout activities. It is a twisted rope of three strands, which each strand itself is made up of many, many more strands wound together. This three-stranded rope becomes very powerful to accomplish all that they intend. And so it is with us when we unite together as one.

In verse 13 we read, “A poor yet wise lad is better than an old and foolish king who no longer knows how to receive instruction.” (Ecclesiastes 4:13, NASB95)

Unlike the single, alienated old foolish king of earlier in the chapter, being a needy lad who knows how to take instruction is much better. Sometimes we can all think that we know everything, but the reality is that we don’t. Treasuring humility is an important part of life. It is the humble person who realizes just how much he can learn from others and who allows them to come alongside him to provide strength and encourage growth. So it is with their time in Scouting as they are encouraged to continue to learn and grow. But even more so, so it is with us as we hide God’s Word in our hearts and we treasure His instruction as we listen, learn, and apply. God knew exactly what He was doing when He put believers into the body of Christ which we know as the church. Jesus reminded us of this in the upper room when He prayed that we might be one even as He and the Father are one with the Spirit.

In wrapping up we jumped down to Ecclesiastes 5:1 where we read, “Guard your steps as you go to the house of God and draw near to listen rather than to offer the sacrifice of fools; for they do not know they are doing evil.” (Ecclesiastes 5:1, NASB95)

Drawing back to our need to be humble learners, I closed by pointing them again to their ultimate need to be that way before God, and to not turn away from Him. There are so many temptations out there to turn our eyes in other directions, to refuse to take instruction, and to set a course of our own choosing. But doing so is foolishness.

And after returning from this, I am very thankful for my wife who tenderly worked the stiffness and soreness out of my body from a couple of days of walking up and down a mountain, while enjoying time with my son and a group of wonderful boys.

Be prepared to suffer for Me, in My Name. All suffering has meaning in My kingdom. Pain and problems are opportunities to demonstrate your trust in Me. Bearing your circumstances bravely – even thanking Me for them – is one of the highest forms of praise. This sacrifice of thanksgiving rings golden-toned bells of Joy throughout heavenly realms. On earth also, your patient suffering sends out ripples of good tidings in ever-widening circles.

When suffering strikes, remember that I am sovereign and that I can bring good out of everything. Do not try to run from pain or hide from problems. Instead, accept adversity in My Name, offering it up to Me for My purposes. Thus, your suffering gains meaning and draws you closer to Me. Joy emerges from the ashes of adversity through your trust and thankfulness.

“Consider it all joy, my brethren, when you encounter various trials, knowing that the testing of your faith produces endurance. And let endurance have its perfect result, so that you may be perfect and complete, lacking in nothing.” (James 1:2–4, NASB95)

“Let them give thanks to the Lord for His lovingkindness, and for His wonders to the sons of men! Let them also offer sacrifices of thanksgiving, and tell of His works with joyful singing.” (Psalm 107:21–22, NASB95)
Posted by Joe Burgess at 12:07:00 PM