“Though I walk in the midst of trouble, You will revive me; You will stretch forth Your hand against the wrath of my enemies, and Your right hand will save me. The Lord will accomplish what concerns me; Your lovingkindness, O Lord, is everlasting; do not forsake the works of Your hands.” (Psalm 138:7–8, NASB95) 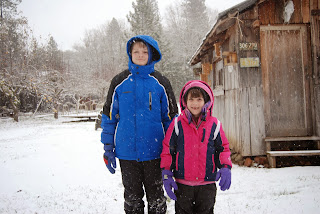 Today was a snow day. The social media pages and the news sources are full of stories and images of whiteness and people out in it. Our kids were no different. I went out to the garage and dug out the snow suits, boots, and gloves and they quickly jumped into them. As they went outside I grabbed a camera for the fun which ensued. As I was taking pictures of my son Jon and the boy next door, watching them start with a small snow ball and each of them rolling their respective balls into objects that grew quite large and heavy. They each had a good time as they rolled their balls downhill leaving trails of exposed grass behind them. But once they reached the bottom of the property they were forced to make a choice, either quit there or push their ever growing balls back uphill again. The path they formed going downhill changed in its nature as they started back up. For the grass that they were pushing from in order to move their bigger and bigger ball had become very slippery and they found it difficult under the weight of their task to keep their footing. Being eleven year-old boys they still felt themselves invincible and fully capable of making it back up the hill (as slight as it is) without any added assistance. Watching Jon, it wasn’t long before I found him sitting exhausted behind the ball which dwarfed him, so I went over and gave him some assistance. Soon he was back to the task on his own, at least for a while until his mom stepped in and helped him also. The boy next door found the help of our son Jim. Eventually the balls were back up to the area where they started as a small round object formed with a couple of hands. Only this time, I think they weighed more than the boys. 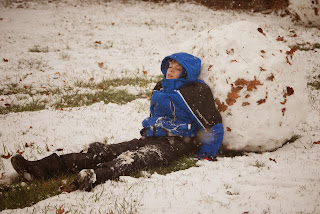 Looking at the path they traveled as evidenced by the grass lines in the snow I saw just how they wove themselves all over the yard before they reached their end. By this time I had already read my devotional for the day and had been thinking about the path that God has for each of us, and I tried to relate this to what I had just seen in our backyard. As we move through life we tackle so many things, and there are definitely seasons where we might gain steam as if pushing a snowball down a slope, watching one accomplishment after another added on. But there are also times when the direction of that slope changes and the nature of the task increases greatly and our measure of progress or success gets clouded or even lost. It isn’t until we step back and look at what is accomplished in both that we gain some perspective and see that just as the ball grew in both on the easy path and on the hard one, so do we grow. In fact, I noticed as they worked harder to push their balls uphill they seemed to have to push harder and harder on the ball probably making it even more condensed and solid under the pressure. Scripture tells us that God is intimately acquainted with all of our ways, that He scrutinizes our paths including our standing us and our sitting down. He is present whether we ascend to heights of descend to the deepest of depths. He encloses us before and behind (Proverbs 3:5-6; Psalms 139). Scripture also tells us that it is through the various trials of our lives that God grows us. It is through these that He increases in us the ability to endure as we mature (James 1:2-4). And Scripture tells us that He limits that which presses in on us in such a way that we can endure it victoriously in Him by the strength that He gives us (1 Corinthians 10:13).

“Trust in the Lord with all your heart and do not lean on your own understanding. In all your ways acknowledge Him, and He will make your paths straight.” (Proverbs 3:5–6, NASB95)

“O Lord, You have searched me and known me. You know when I sit down and when I rise up; You understand my thought from afar. You scrutinize my path and my lying down, and are intimately acquainted with all my ways. Even before there is a word on my tongue, behold, O Lord, You know it all. You have enclosed me behind and before, and laid Your hand upon me. Such knowledge is too wonderful for me; it is too high, I cannot attain to it. Where can I go from Your Spirit? Or where can I flee from Your presence? If I ascend to heaven, You are there; if I make my bed in Sheol, behold, You are there. If I take the wings of the dawn, if I dwell in the remotest part of the sea, even there Your hand will lead me, and Your right hand will lay hold of me.” (Psalm 139:1–10, NASB95)

“Consider it all joy, my brethren, when you encounter various trials, knowing that the testing of your faith produces endurance. And let endurance have its perfect result, so that you may be perfect and complete, lacking in nothing.” (James 1:2–4, NASB95)

“No temptation has overtaken you but such as is common to man; and God is faithful, who will not allow you to be tempted beyond what you are able, but with the temptation will provide the way of escape also, so that you will be able to endure it.” (1 Corinthians 10:13, NASB95)

There are so many passages I can think of speaking of our God who knows and empowers, who plans and brings about the completion of those plans, and who calls and protects all who He calls.

The kids had a great time in the back yard playing in the snow, making snow balls and even throwing them. Jim and Beth took a basketball and coated it, so that Beth could push it around and watch it grow. And Jonny and his friend, though the path was not easy, at the end of the day they were able to climb up on the completed work—their huge snow balls—and rejoice in all that had been accomplished.

“I will cry to God Most H

igh, to God who accomplishes all things for me. He will send from heaven and save me; He reproaches him who tramples upon me. Selah. God will send forth His lovingkindness and His truth.” (Psalm 57:2–3, NASB95)

“Trust in the Lord with all your heart And do not lean on your own understanding. In all your ways acknowledge Him, And He will make your paths straight.” (Proverbs 3:5–6, NASB95)

Stay ever so close to Me, and you will not deviate from the path I have prepared for you. This is the most efficient way to stay on track; it is also the most enjoyable way. Men tend to multiply duties in their observance of religion. This practice enables them to give Me money, time, and work without yielding up to Me what I desire the most—their hearts. Rules can be observed mechanically. Once they become habitual, they can be followed with minimal effort and almost no thought. These habit-forming rules provide a false sense of security, lulling the soul into a comatose condition.

What I search for in My children is an awakened soul that thrills to the Joy of My Presence! I created mankind to glorify Me and enjoy Me forever. I provide the Joy; your part is to glorify Me by living close to Me.

“Whatever you do, do your work heartily, as for the Lord rather than for men,” (Colossians 3:23, NASB95)

“You will make known to me the path of life; in Your presence is fullness of joy; in Your right hand there are pleasures forever.” (Psalm 16:11, NASB95)
Posted by Joe Burgess at 4:05:00 PM